Developed to offer a premium experience while meeting the complete needs of an entire family, the redesigned fourth-generation Santa Fe goes beyond a mere facelift. A fresh look and feel along with new features can be seen from all sides of the car as well as the interior.

“We modernised the new Santa Fe with premium features and appealing aesthetics that are sure to add value,” said SangYup Lee, Senior Vice President and head of Global Design Centre. “The bold lines that extend from one side to the other and from front to back give Santa Fe a rugged yet refined look that SUV customers want. Besides, we’ve added numerous features and functions to create a truly family-focused SUV that is a pleasure to drive.”

The new Santa Fe’s front section is defined by the wide grille that extends across the entire width of the vehicle. The clamped shape of the lower air intake harmoniously extends the horizontal line to accentuate the vehicle’s wide and well-balanced stance.

The grille, with its signature geometric patterned inlay, also integrates the headlamps, a signature style found on many Hyundai cars. The eye-catching LED Daytime Running Lights (DRL) start at the top of the grille and cut through it to create unique T-shapes at each corner when lit. 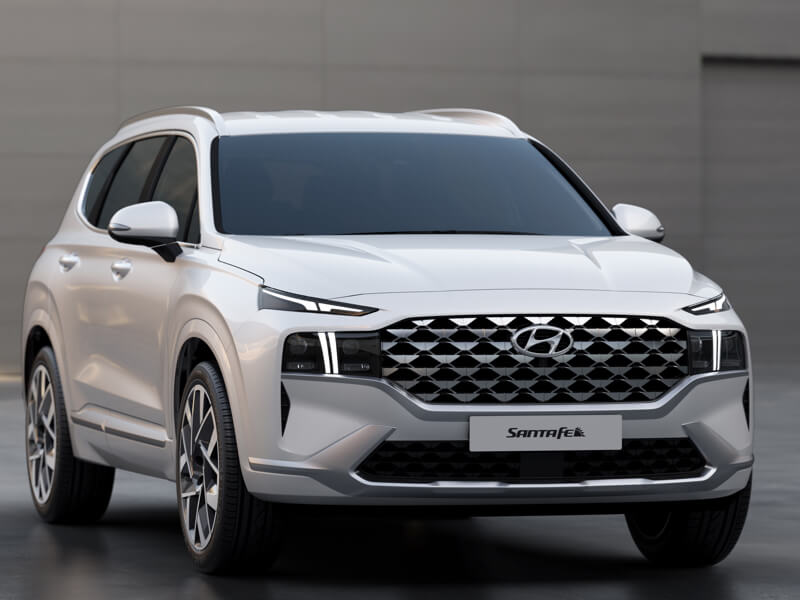 Each side section of the New Santa Fe is characterised by a seamless line that connects the DRL to the taillights, giving the car a sensuously sporty look. The increased width on wheel arches accentuate the SUV’s rugged and powerful character, which is also emphasised by 20-inch wheels.

The new Santa Fe’s redesigned taillights are connected across the rear hatch by a slim illuminated bar that complements the horizontal design theme on the front and sides of the vehicle. The theme is once again expressed by the wide rear reflector and skid plate, creating a unique three-layer look.

The New Santa Fe’s redesigned interior now provides more space, comfort, and convenience compared to the previous model. It takes the car to a new level of luxury with every component finished in premium soft-touch materials. The centre console sits high, giving the driver and front passenger the feeling of sitting in an armchair.

The buttons are all centred for intuitive and ergonomic use. In the middle of the redesigned centre console sits gear shift buttons along with other functions that are used often. The shift-by-wire system allowed the designers to put buttons instead of the conventional shift knob.

For the first time, the new Santa Fe comes with a Terrain Mode selector: a control knob located in the centre console to conveniently switch between different drive modes, optimising performance and HTRAC® All-Wheel-Drive (AWD) settings for a variety of driving situations. This feature includes unique modes for sand, snow and mud, as well as eco, sport, comfort and smart modes, the last of which automatically recognises the driving style and selects a mode so the driver does not have to.

Australian Market
The new Santa Fe will arrive locally in the second half of the year (2020), more detailed information will be provided closer to the Australian launch.

Two decades of the Hyundai Santa Fe: evolution of an automotive icon.