Hyundai Motorsport heads to Mexico aiming to maintain its unbroken run of podium finishes in the 2016 FIA World Rally Championship (WRC), having achieved consecutive top-three finishes in the two opening rounds of the season.

Third place for Thierry Neuville in Monte-Carlo and second for Hayden Paddon in Sweden marked the first-ever back-to-back podiums for Hyundai Motorsport, setting a strong debut for the New Generation i20 WRC. The team will now hope to repeat this feat at the scene of its debut WRC podium two years ago.

The heat and harsh gravel terrain of Mexico will, however, offer a stern new test for the three New Generation i20 WRCs and the team's trio of drivers, who have all demonstrated impressive pace in the first two rallies of the year.

Thierry and co-driver Nicolas Gilsoul - who memorably finished on the Mexico podium in 2014 - will once again take to the #3 car for Hyundai Shell World Rally Team and will be joined by Dani Sordo and Marc Martí in the #4 car. Hayden Paddon and John Kennard will drive for Hyundai Mobis World Rally Team, behind-the-wheel of the #20 New Generation i20 WRC.

Rally Mexico was first held in 1979 before relocation to León in 1998. It is a relatively young event in the WRC, having only featured in the championship since 2004. With ambient temperatures pushing 30°C, the environment is a far cry from the colder conditions of Monte-Carlo and Sweden, placing huge stress on cars and crews alike.

In addition to the heat, drivers have to tackle unforgiving gravel roads, which become heavily rutted by the second pass. Altitude is also an extra test for man and machine. The mountains around Guanajuato reach 2737 metres elevation above sea level, at which point the thin air places further stress on engines. As a result, cars can lose up to 20% power.

Rally Mexico sees a number of new features introduced for 2016, including a León night stage to end Saturday's action and Sunday morning's gigantic 80km Guanajuato, which is the longest WRC stage since 1983. The punishing itinerary and extreme conditions mean that nothing is guaranteed as Hyundai Motorsport aims to keep pace with Volkswagen Motorsport in the Manufacturers' standings.

Team Principal Michel Nandan said: "Our team heads to Mexico with a lot of positivity after the performances so far this year. At the same time, we know that this rally will offer a new set of challenges and demands on our New Generation i20 WRC cars and the team itself. The new car has already proven to be a step forward on its predecessor but we have more to learn on the tough Mexican terrain. We will have to wait and see if we can challenge for the podium again but that's our objective. This year's itinerary for Rally Mexico includes an extremely daunting 80km stage on Sunday morning, which will put the cars and crews under immense pressure. There will be no room for error and it adds an extra layer of difficulty to a rally that was already one of the toughest. It will be exciting - and nerve-wracking - to follow. We head to Mexico just five points behind Volkswagen Motorsport in the Manufacturers' Championship, so we're more than motivated to fight at the front - and hopefully to make it three podiums in a row!"

Neuville (#3 New Generation i20 WRC) is no stranger to success at Rally Mexico. Having taken his first ever WRC podium at the event, he followed that up in 2014 with Hyundai Motorsport's first ever top-three and last year took three stage wins.

Neuville commented: "I have very positive thoughts about Mexico because it is where I got my first podium in the World Rally Championship. It is also where we got the first podium for Hyundai Motorsport so I am sure the whole team has very good memories as well. We are all looking forward to this year's event with the beautiful weather and stages as well as running the New Generation i20 WRC at altitude. We sorted out some problems that I had with the car from the last rally; everything is running well now and I am pleased with its performance potential. I look forward to taking on the Mexican stages once more and trying to get another top-three finish."

Sordo (#4 New Generation i20 WRC) is also very familiar with the roads of Rally Mexico, and last year achieved a stage win and five top-three stage finishes in total. The Spaniard is eager to build on his 2016 rhythm after a consistent pair of top-six performances at Monte-Carlo and Sweden.

Sordo said: "Rally Mexico is a really nice event, which has exceptional weather and some very picturesque stages. However, the rally is also really high in altitude, so the engines lose a lot of power. This means that we have to be very aware of the roads to make sure we get the most speed out of the car as possible. The roads themselves have a really good surface but it can be very different between the first pass and the second, when there can be a lot more grip. This year there will be a very long stage as well, so it will be nice to run that. I am enjoying getting to grips with the New Generation i20 WRC and look forward to continuing this at Mexico. As we get more and more comfortable I look forward to pushing harder for the top-three finishes that I know we can achieve with this car."

Paddon commented: "We are really excited to be competing at Mexico again and it will be great to be in the sun for the first time in a long time after a series of wet and cold rallies. It will be a challenging rally for sure, with some much longer stages than normal, particularly the 80km Guanajuato stage. But we are really looking forward to it, to getting back into the new car, and particularly to do so on the gravel stages that make up Rally Mexico. I felt really good in the car at Sweden and we will look to continue adjusting that feeling on the Mexican stages so that we are comfortable, and can really shoot for points. This rally will be all about learning the car and the Mexican roads, and I hope we can bring home another good result."

This year's Rally Mexico will cover over 399km over 21 stages across the Sierra de Lobos and Sierra de Guanajuato mountain ranges, starting on Thursday night with the exciting Guanajuato ceremonial start that sees huge crowds and festivities at the UNESCO World Heritage Site as drivers tackle the city's former mining tunnels.

Action on Friday continues with two runs of the 54.21km El Chocolate and 15.36km Las Minas stages, as well as two 2.30km passes of the Super Special held in the León Autodrome. Drivers then circle back to León for Saturday's stages, including Ibarrilla (30.38km) and two runs of Otates (42.62km) and El Brinco (7.15km) each. Additional features in this busy day include two more passes of León Autodrome, Agua Zarca (16.47km) and the 1.41km León night-time street stage.

Mexico's exciting selection of gruelling, long stages then concludes on Sunday with the monstrous 80km Guanajuato stretch, preceding a second running of Agua Zarca that will be the rally's Power Stage. 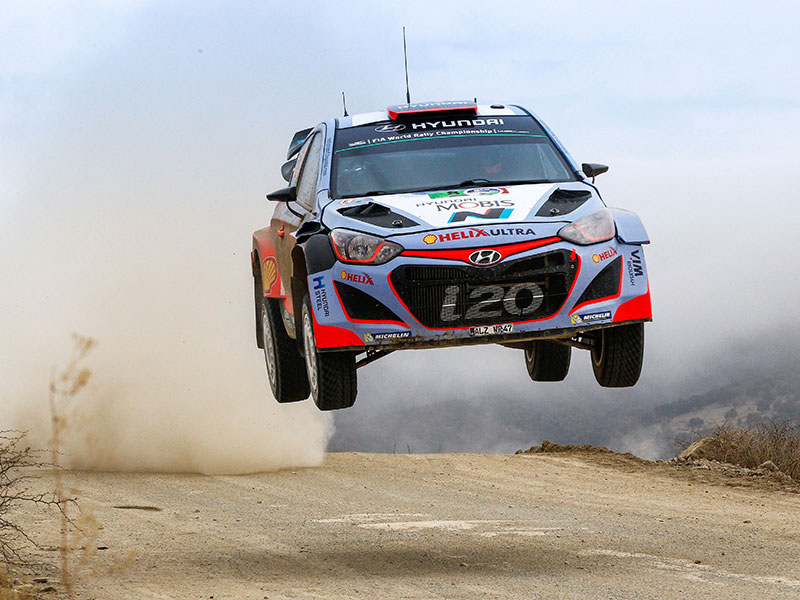