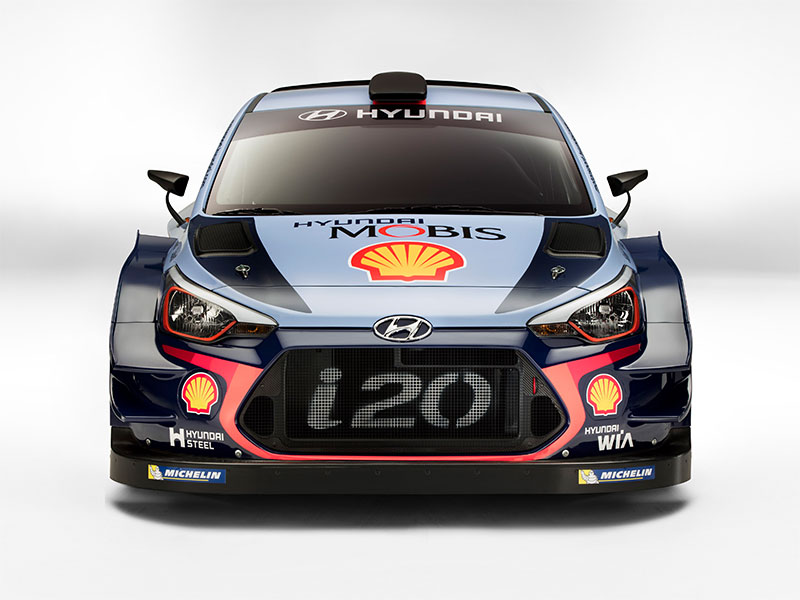 Hyundai Motorsport has today unveiled its Hyundai i20 Coupe WRC, a brand new car with which the team will compete in the 2017 FIA World Rally Championship (WRC).

The car, which has been designed to meet WRC’s raft of new technical regulations, was unveiled during a static media event at the Autodromo Nazionale Monza.

For Hyundai Motorsport, the three-door Hyundai i20 Coupe WRC represents the team’s third new car since its debut in the Championship back in 2014 – following the Hyundai i20 WRC (2014-15) and the New Generation i20 WRC (2016). Entering its fourth season, the team hopes to continue a positive period of growth in recent years as it embarks on a new era for the sport.

The technical new regulations for 2017 have been introduced to enhance the overall spectacle of WRC even further than before, with cars sporting an aggressive new look. While changes have centred on improving aerodynamic and mechanical grip, there has been an increase in engine power from 220kW to 280kW, a reduction in the overall weight of the car, and the re-introduction of the active centre differential.

Hyundai Motorsport started testing its new car in April, alongside its ongoing 2016 WRC campaign. The car had already accumulated 6,000km of testing prior to the launch, with further tests planned ahead of its competitive debut at Rallye Monte-Carlo in January 2017.

With the new car, the team hopes to build on its most successful season to date, in which it secured two victories and an additional ten podium finishes. Hyundai Motorsport crews finished in the top-three in 10 out of 13 rallies last season.

Team Principal Michel Nandan said: “We are heading into a new era for the sport with the biggest change to the regulations for some time. It’s a great new technical challenge and one that we have tackled with enthusiasm. It’s an opportunity to put into practice everything we have learned and experienced in the past three seasons. All teams are starting from scratch so we are on equal footing. Having finished in second position in 2016, we want to demonstrate our ability to fight for the Championship in 2017 – and we are confident the Hyundai i20 Coupe WRC will help us do just that.”

There will be an unchanged driver line-up for 2017, which will offer the team important stability with the introduction of a new car. Thierry Neuville, Hayden Paddon and Dani Sordo will contest all rounds of the Championship alongside their respective co-drivers Nicolas Gilsoul, John Kennard and Marc Martí.

The team is also delighted to announce an extension to its partnership with title sponsors Shell and Hyundai Mobis. The agreements expand on the successful long-standing relationships with both companies. The continuation of these partnerships is particularly poignant as WRC enters an exciting new period. 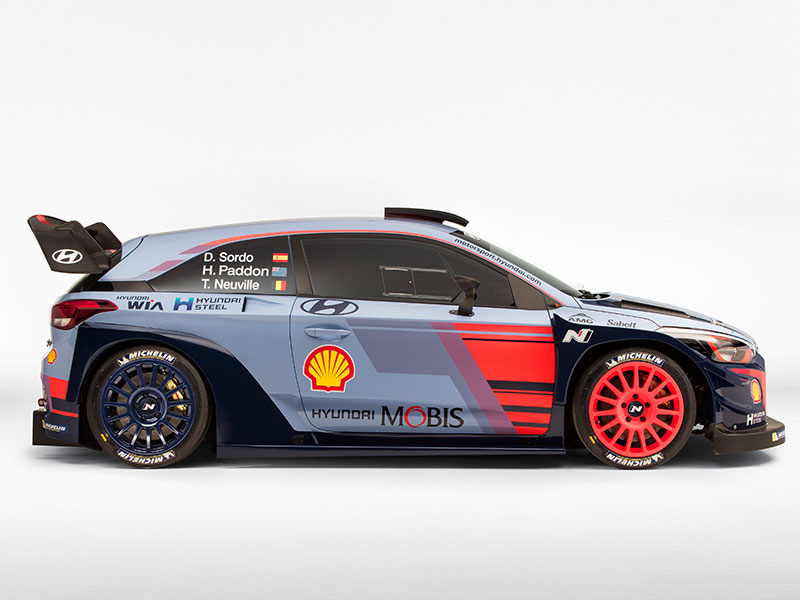 New sporting regulations for 2017 mean that manufacturers will be able to field up to three cars in each round, with the two top classified finishers scoring points for the Manufacturers’ Championship. After three seasons of competing with two separate team names, Hyundai Motorsport’s three crews will run under a unified banner in 2017: the Hyundai Shell Mobis World Rally Team.

Nandan added: “We have a very strong, consistent and versatile driver line-up. We had a competitive season in 2016, with victories, podiums, stage wins and Power Stage points. To have all of our drivers involved in such a close fight for second right up to Australia showed just what strength in depth we have. We built positive momentum, particularly in the second part of the Championship, so we want to continue that into 2017. We have the confidence in the team to compete at the front and to be seen as genuine contenders in WRC’s new era.”

Neuville and co-driver Gilsoul were one of the standout crews in 2016, taking victory in Sardinia and an impressive string of podium results. Finishing second in the Drivers’ Championship, the Belgians want even more in 2017.

Neuville said: “I have high hopes for our new Hyundai i20 Coupe WRC, which is the product of a lot of hard work from everyone in the team. I am optimistic it will help us to continue our momentum in the competitive WRC. My initial impressions of the car in testing were very positive. The changes in regulations have allowed us to make improvements in key areas, such as aerodynamics and rear stability. The increase in power is incredible while the additional grip and driveability gives us more confidence to push. For the spectators, there will be a visibly marked difference in terms of the car’s speed. I can assure you we will be able to feel it in the car too! We had a very positive 2016 season, and I was delighted to finish the season second in the Championship. Of course, from here there is only one place to go, and we want to be firmly in the fight for the title in 2017.”

Paddon claimed an impressive maiden WRC win in Rally Argentina in 2016, with further podiums in Sweden and Poland. The Kiwi and his compatriot co-driver Kennard will be aiming for a more consistent Championship in 2017.

Paddon commented: “My target for 2017 is to continue the improvements we showed during this past season. I want to start challenging for more rally wins and demonstrate more consistent speed throughout the year. The Hyundai i20 Coupe WRC is enjoyable to drive and I think it will be more exciting for the spectators too. I like that the cars will be more tuneable to each driver and driving style. The new regulations will help to make the sport even more appealing to a new generation of motorsport fans. With more radical looking and sounding cars, I think we will be able to attract a younger fan base that may not have been so familiar with rallying before. On a personal note, I feel happy to remain part of the Hyundai Motorsport family. We all know each other very well and we grow stronger all the time. There is a great team spirit and it’s amazing to work with such a highly motivated group of people.”

Second-placed podium finishes were the highlights of a consistent 2016 season for Sordo, alongside co-driver Martí. The Spaniard has his sights set on more of the same when the new-look WRC gets underway in 2017.

Sordo said: “We are all looking forward to this new season. It will be a fascinating one for everybody with the new technical and sporting regulations. With such a significant change, we will have to wait until the first rallies of the Championship to see how things develop, but I am confident. When I first tested the Hyundai i20 Coupe WRC, I was taken aback by the speed of the car. The more powerful engine and increased grip from the aerodynamics are impressive. I am sure this will be an exciting season to be a WRC spectator as well as for us inside the car! It’s very special for me to remain part of the Hyundai Motorsport team. It’s more than just team; it really is like a family. We work very well together and the atmosphere is incredible. The people in this team are some of the best in the business, so we have everything we need for a competitive car and a successful 2017.”

Following today’s launch, Hyundai Motorsport will remain in Italy for the popular Monza Rally Show this weekend, in which the team will participate with a New Generation i20 WRC car, driven by Dani Sordo. 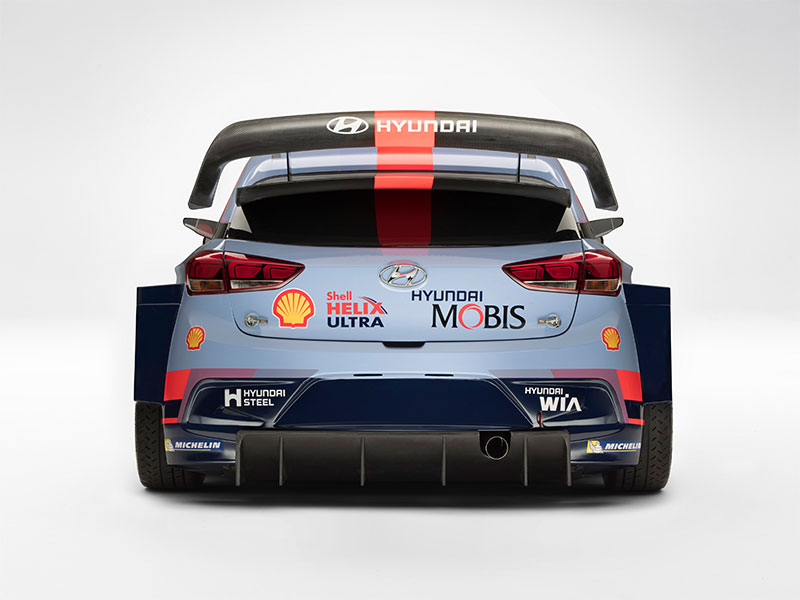