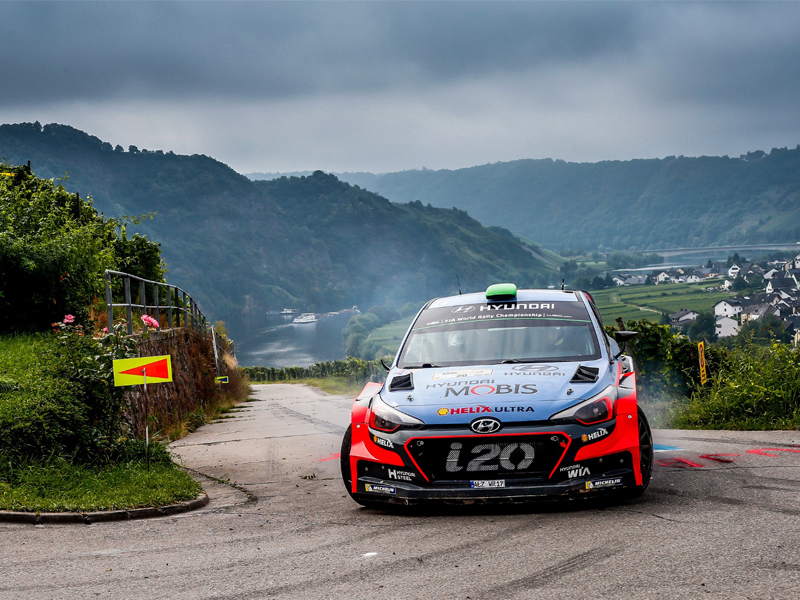 Hyundai Motorsport has claimed a fantastic double podium result with Dani Sordo and Thierry Neuville finishing in second and third respectively in Rallye Deutschland, the ninth round of the 2016 FIA World Rally Championship (WRC).

In one of the most thrilling finales of the season so far, three driver crews battled it out for second position with Sordo, Neuville and Volkswagen Motorsport driver Andreas Mikkelsen separated by four seconds at the start of Sunday’s final stages.

The fight came right down to the wire - the 14.84km Sauertal Power Stage - following the cancellation of the penultimate stage (SS17 Dhrontal 2) earlier in the morning. Although Neuville claimed Power Stage honours - and three extra Drivers’ Championship points - it was Sordo who took second place honours.

The result sees Hyundai Motorsport consolidate second in the WRC Manufacturers’ standings, breaking through the 200-point barrier (201 to Volkswagen Motorsport’s 256) with four rallies left to contest this season (Corsica, Spain, GB and Australia).

Sordo (#4 New Generation i20 WRC, 2nd place overall) and co-driver Marc Martí bounced back in style this weekend, after being forced to skip Rally Finland. The Spanish crew started Sunday with a stunning stage win (SS15 Dhrontal 1) and fended off a hard-charging Neuville to take their first podium of 2016 in spectacular style.

Sordo said: “That was unbelievably close but I am delighted to take our first podium of the season. We have come so close many times this year with fourth places in Mexico, Argentina, Portugal and Sardinia so it’s great that we’ve finally done it. After the disappointment of not being able to participate in Finland, we wanted to come here and show a good performance. It’s not been easy with the tricky conditions but we’ve kept our focus and this second position is the perfect reward. The car has performed faultlessly this weekend, and the team has to be commended on their work. It’s a big effort from everyone so to have two cars inside the top three is a wonderful result, especially in the home rally.”

Neuville (#3 New Generation i20 WRC, 3rd place overall) and co-driver Nicolas Gilsoul pushed hard to claim their third podium result of the season, following third in Monte-Carlo and their victory in Sardinia. The Belgians won both Sauertal stages today (SS16 and SS18) to take their total of stage wins to five this weekend, and to pick up three extra points for a fine Power Stage victory.

Neuville commented: “It was a thrilling battle for second and we did absolutely all we could. I am still happy to take third place and to share a double podium. It’s a special team result after a complicated weekend in unpredictable conditions. We had a strong final morning, showing our potential with two stage wins, including the Power Stage. It wasn’t quite enough to get past Dani for second place but it could not have been any closer. The three PS points are a nice reward so thanks to the whole team for giving us a car that could be so competitive this weekend. Now, our attention turns to Corsica!”

Paddon (#20 New Generation i20 WRC, 5th place overall) moves up to third in the WRC Drivers’ Championship on 94 points after a solid run to fifth. The Kiwi and co-driver John Kennard escaped a tough Friday and made important improvements as the rally progressed, finishing today with three top-six stage times.

Paddon said: “It’s not been a straightforward rally for us but I am pleased to have ended it on a positive note. We’ve picked up a decent haul of points for fifth place, which lifts us to equal third in the Championship. We have used this weekend to learn more about our driving in this rally, which is without doubt the most challenging of the asphalt events. We made some small improvements today, which will help us for the next rally in Corsica. Most importantly, it has been a great weekend for the team with a double podium. It’s a great reward for everyone’s effort back at Alzenau.”

Today’s result marks the first double podium result of the season for Hyundai Motorsport - representing the team’s sixth and seventh podiums of 2016. It also heralds a return to the German podium for the first time since Neuville and Sordo finished 1-2 in the team’s debut season in 2014.

Team Principal Michel Nandan commented: “What a finish that was! We knew it was going to be a close one but I don’t think anyone predicted it would be that tense. 0.1 seconds after 17 stages and almost 300km of special stages is incredible. I’d like to say congratulations to Dani, Marc, Thierry and Nicolas on a fantastic clean and exciting fight. It’s wonderful to get two cars on the podium for the first time this season - and in our home rally makes it even more special. In fact, with Hayden finishing in fifth, it’s the first time we’ve had all three cars finish inside the top-five this season. It’s a nice result for everyone in the team and gives us confidence in the performance of the New Generation i20 WRC across a range of tarmac conditions. We now have several weeks until Corsica, during which time we will review all we’ve learned and prepare as best we can for the final four events of the season.”

Tour de Corse will be round ten of the recently shortened 13-event WRC season, and will take place from 29 September to 2 October.