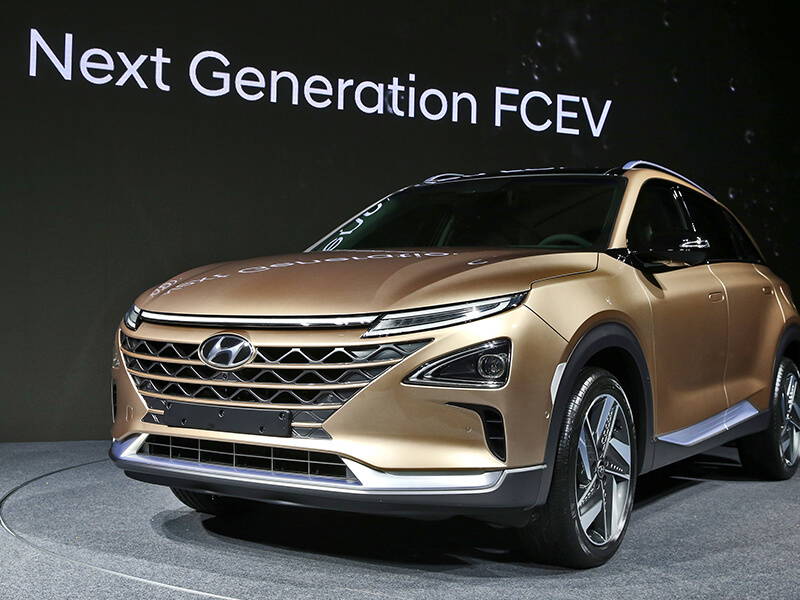 Hyundai Motor has offered an early glimpse of its next generation fuel cell vehicle, well ahead of the hydrogen-powered SUV’s official launch early next year. At a special preview event held in Seoul, the near-production-ready version exhibited its impressive capabilities while revealing its futuristic design. The yet-to-be-named model embodies Hyundai Motor’s commitment to a new era for advanced eco-friendly vehicle development.

Fuel cell system efficiency: By enhancing fuel cell performance, reducing hydrogen consumption, and optimizing key components, the vehicle’s efficiency is greatly improved compared to the its predecessor, the ix35 Fuel Cell (Tucson Fuel Cell in some markets). The new SUV boasts an efficiency level of 60%, or a 9% increase from the ix35’s 55.3%. With enhanced system efficiency, the new model targets a driving range of more than 580km on a single charge (based on Korean testing standards).

Performance (maximum output): The new model’s maximum output is enhanced by 20% compared to its predecessor, boasting an impressive 163PS (119kW) of power. The fuel cell SUV also improves the car’s cold start capability, overcoming the challenges of starting fuel cell vehicles in temperatures below freezing point. The vehicle’s architecture is optimized to allow it to be started at -30 degrees Celsius (22 degrees Fahrenheit), by incorporating key components in the fuel stack developed by Hyundai Motor. In addition to boosting the new car’s capabilities, the enhanced components – such as MEA (membrane electrode assembly) and bipolar plates – also helped to reduce production costs.

The mass-produced new vehicle will also feature advanced driver assistance technologies, alongside its extensive hydrogen-powered range. The details of the new ADAS features will be disclosed in January at the 2018 CES, along with the official model name.

Futuristic design inspired by nature
The new FCEV inherits striking design features from the FE Concept, which was introduced at the 2017 Geneva Auto Show. The new model builds on the earlier concept’s design, taking an organic and flowing form, inspired by nature – namely water, the car’s only emission – with the clean design emphasizing its non-polluting nature.

The new vehicle embodies pure and serene design, which reflects its calming presence on the road. It also exhibits a confident, charismatic SUV stance, that reflects its capabilities to travel long distances and explore remote places, all while being in harmony with nature.

The high-tech look is augmented by low-drag elements that accentuate the clean and calm design. The door handles sit flush to the car, while the air curtain – in conjunction with the air tunnel inside the D-pillar – maximizes aerodynamic efficiency. The SUV’s wheel design aims to capture both captivating style and optimized low drag airflow with a specialized two-piece construction.

Reflecting the exterior design, the interior features subdued yet sophisticated colors inspired by nature. The understated tones help create an ultramodern environment, complemented by industry leading bio-materials with eco-friendly certification. Completing the futuristic finish is a unique blend of woven fabric and suede used for accents in the seat design.

Hyundai Motor plans to take a multi-pronged approach to its eco-vehicle program. The company is committed to a future vehicle line-up comprising a variety of powertrain options – electric, hybrid and fuel cell – to suit customers’ varied lifestyles.

Spurred on by greater global demand for fuel-efficient, eco-friendly vehicles, the roadmap sets out the brand’s goal of leading the global popularization of hybrid vehicles, expanding its lineup to SUVs and large vehicles. Another part of the plan is the development of 4WD and FR (Front Engine Rear Wheel Drive) variants, building on its proprietary Transmission-Mounted Electrical Device (TMED) system, which was developed in 2011.

While Hyundai Motor continues to develop its leadership of the electric vehicle market with its current IONIQ model, the company also aims to establish a lineup ranging from small EVs to large and luxurious Genesis-brand models. Hyundai Motor’s electric vehicle development will take place in multiple phases:

Furthermore, Hyundai Motor will develop its first dedicated architecture for pure electric vehicles, which will allow the company to produce multiple models with longer driving ranges.

Hyundai Motor will also strengthen its global leadership in hydrogen fuel cell technology. This will center on enhancing research and development efforts to boost FCEV performance and durability, while also making the technology smaller and cheaper so that it can be applied to smaller sedans. As part of these efforts, Hyundai Motor will unveil a new hydrogen-powered bus in the fourth quarter of this year.

Hydrogen Society within everyone’s reach
Hyundai Motor will also take part in the Hydrogen House, projected by the Seoul city government, displaying prototypes of the new fuel cell vehicle starting today until November 17 that will promote emission-free fuel cell vehicles and a Hydrogen Society. It is through initiatives like this that Hyundai Motor will demonstrate how a Hydrogen Energy Society could be realized in the not-too-distant future.

Hyundai Motor, the world’s first automaker to have introduced a mass production line for hydrogen fuel cell cars, has supplied fuel cell vehicles since 2013, and now sells them in 18 countries around the world. The company began researching fuel cell technology in 1998 and developed its first fuel cell vehicle based on the Santa Fe SUV, as part of a collaboration with CaFCP (California Fuel Cell Partnership).

Through numerous years of development and production, Hyundai Motor has proved that fuel cell vehicles are as competitive as internal combustion engine cars in terms of safety and reliability.

Hyundai Motor will reveal the new hydrogen SUV early next year in Korea, followed by the North American and European markets. The company will also consider expanding availability of its new fuel cell model to markets with high growth potential for eco-friendly vehicles such as China.

FE in Australia
Two left-hand-drive prototype FE’s were in Australia last month for cold-weather testing. A team of Hyundai Motor Company engineers from South Korea were validating the car’s systems in the Snowy Mountains as part of a global testing and durability programme.

Hyundai was the first car company in Australia to permanently import a Fuel Cell Electric Vehicle, the ix35 Fuel Cell, and has agreed to supply 20 FE’s to the ACT Government in late 2018 as part of the Hornsdale Windfarm Stage 3 project. 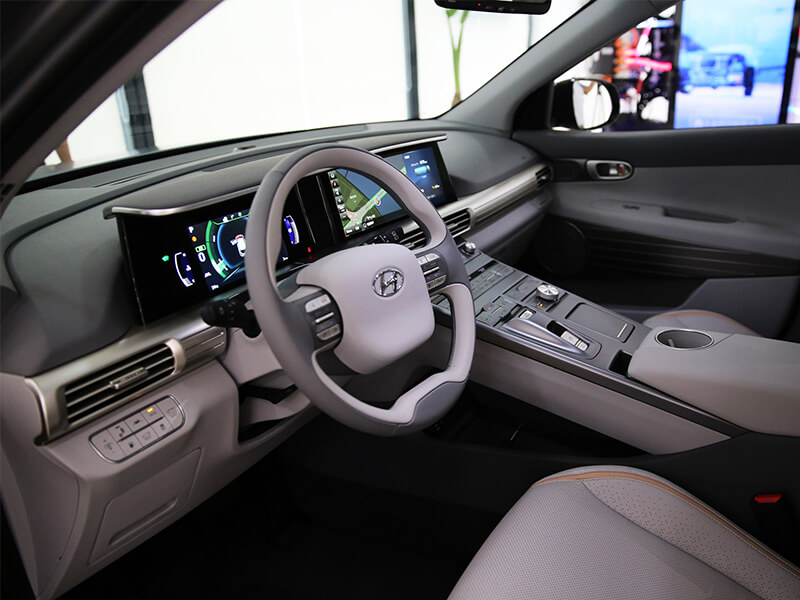 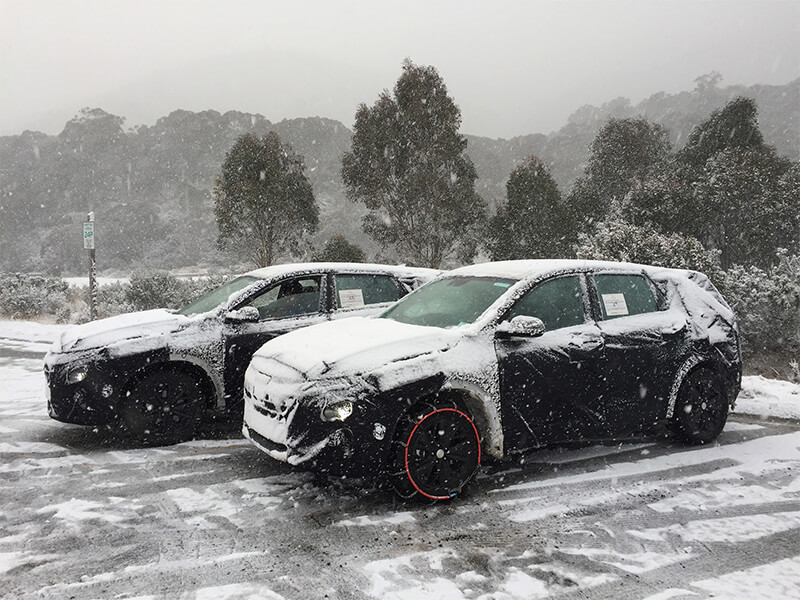 How the Hyundai NEXO performed in the first Hydrogen fuel cell vehicle test by the IIHS.